Thoughts on the Great Chicken Debacle 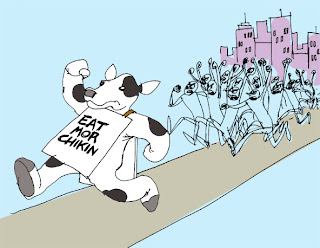 Frankly I am terrified to write about the Chick-fil-A situation. It has been a long time since I have seen people so divided about an issue and by and large not give a damn about whether they were upsetting or offending people whose opinions differed from their own. Actually it seems they have really enjoyed upsetting and offending those that disagreed with what they believed. I have seen both liberals and conservatives act extremely intolerant about a subject that is supposed to revolve around tolerating others and our right to express our opinions. There has been much written about whether same sex marriage is right or wrong so I am not going to address the specifics of that debate. Nor am I going to tackle how each side may or may not be exercising  their own free speech while trying to shame others for speaking about their own point of view. For the record I am a conservative Christian and many of my political opinions lean to the right, however the one thing I'd like to talk about is how we as a church might be perceived by the gay community.
Many gay people that I have known have felt shunned, hurt and rejected by the Church and I know how they feel. I am not gay, but my story is somewhat similar.
I was born in 1970 to a mother who was unmarried. Today that is seen as almost a complete non-issue, but in the early 1970's this was a HUGE deal. Growing up in New Orleans my entire family were devout Catholics and when all of my little friends were preparing for their first communion I wondered why I wasn't undergoing this rite of passage. I asked my mother why we didn't go to mass like every other person that I knew. It was then she told me the story of how as an infant she had taken me to the parish priest and requested that I be Christened. He told her that since my parents were unmarried he would under no circumstances allow me to participate in any rites or ceremonies of the church. In short, I didn't measure up. I developed a very deep and bitter distaste of the church and what it represented. It wasn't until I was 30 years old that I was able to see past the fallibility of man to the love of Jesus.
We may wonder why the LGBT community in America are making such a big deal about Dan Cathy's remarks. I believe in part it has to do with years of "sin ranking" that has been prevalent for centuries. How many of us engage in gossip? Lust? Greed? Sloth? Wrath? Envy? Pride? How about gluttony? A pastor whose blog I follow hit the nail on the head when he said that "gluttony is way more of a problem in the church today than homosexuality!!! (Please see Proverbs 23:2…pretty intense!!!  ONLY in the church can people that are huge condemn people who are homosexual and somehow feel like that they are spiritually superior!)
Whether I believe that same sex marriage is beautiful, evil, or whether I am completely apathetic I probably have a couple hundred planks to get out of my own eye first.
Please understand that you may be innocently posting a picture of your Chick-fil-A bag from dinner because you support free speech, but to some it may be considered a red flag. For years if I even heard someone use the word "bastard" to describe the guy who drove like an idiot or the receiver that dropped the ball during a big play, I died a little bit inside and I would feel ashamed. I may have been over sensitive but understandably so. Do I think the gay community might be overreacting? Probably, but when I consider my own story, I understand.  Jesus loved everyone and used compassion and love to win people to him. Unfortunately I haven't seen a lot of compassion or love today.

As a side note to any liberals whether gay or straight who may be reading this: When you allow D-list celebrities like Roseanne Barr to wish cancer on us for eating where we choose or Thomas Roberts, an msnbc anchor saying that if you are a liberal who eats at Chick-fil-A then you are a "chicken-eating Judas", your argument is harmed enormously. Please stand up and tell these freaks they need to hush before they embarrass your cause any further.
Posted by Jenn at 10:41 PM